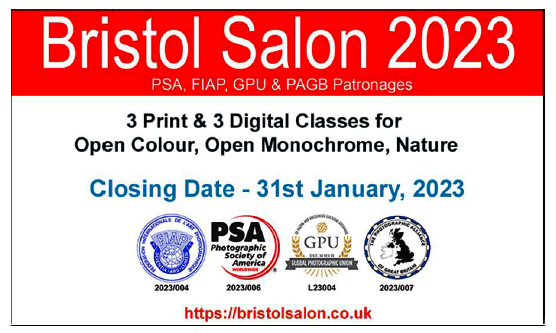 The winners of the 2022 Stanley Chell competition, organised by Aberdare Camera Club, were Bridgend & District CC.  Second were Cwmbran and third, Neath. The judge was Ian Bateman FRPS MPAGB AV-AFIAP APAGB of Exmouth.

The Doris Chell Memorial Trophy for Best Overall Image was won by Jenny Hibbert of Bridgend with her image “Brown Bear Guarding Kill.

The Glyn John Trophy for The Best Colour Print was won by Kevin Morgan of Cwmbran with image entitled “What You Looking At”.

The Hans Hoyer Trophy for Best Monochrome print was “The Girl the Fan” from Chris Tidman of Gwynfa.

Some good news; following on from our PAGB Exhibition in the Quadrant Shopping Centre in Swansea, Urban Foundry (who arranged the Swansea exhibition) have now organised a space for us to hold an Exhibition in Bridgend Indoor Market from January to March.

We intend to use the 50 best prints from the Memorial Trophy Competition to hang at this venue for February and March.  In January we will use the space for an ad-hoc exhibition. This will bring our Federation, its photographers and their images to a new audience.

We will also be looking at the practicality of displaying the PDIs from this event on a monitor at the same time – but details need checking.

I have been asked by a number of people the details of this event. So for clarity: –

Good Luck to all that take part.

The Awards and Individual sections are below.

(click on the section you wish to view and then click through images. each section has a number of pages so as you reach the last image, click to the next page) END_OF_DOCUMENT_TOKEN_TO_BE_REPLACED

We are pleased to announce that the 2023 Memorial Day competitions will be hosted by New Quay CC and will be held at the Memorial Hall, Towyn Road, New Quay, Ceredigion, SA45 9QQ on 22nd January 2023. The closing date for entries will be 8th January 2023 and there will be a £ 10 per club entry fee.

Please notify Roy Thomas, before December 18th, to let him know if you intend to take part, or not. (Roy17@btinternet.com)

Below you can find information, conditions of entry and entry forms.

The WPF has decided that it is long past time to re-launch our Award for Meritorious Service the Hon.FWPF; on our website there is a new link which lists all the current holders of this award.

We attach for your perusal the documentation providing details of the criteria required to earn this award and an application form which must be completed and sent with the citation to the Awards Secretary at  honfwpf@thewpf.co.uk

So the question is: –

END_OF_DOCUMENT_TOKEN_TO_BE_REPLACED

Club registration and data sheets for 2023 have now been e-mailed to all clubs.

The AWPF assessment was held on the 6th November 2022, despite the awful weather we still had an audience of about 50 dedicated photographers and supporters many traveling hundreds of miles to attend, we are grateful for their support. We were unable to broadcast the event via Zoom.

There were 20 applications, for the 2022 AWPF award. 16 print submissions and 4 Digital submissions, unfortunately 11 candidates failed to reach the standard required to achieve a successful outcome. That is a pass rate of 45%.
Those 9 candidates that did achieve the high standard the award demands, are listed below.