The PAGB National PDI Championships at Warwick very nearly saw a first win for a Welsh club with the Inn Focus Group finishing the final round tied on 243 points with Wigan 10, three points ahead of the third placed club, Dumfries.

For a short while we thought they had won but the otherwise flawless team behind the scenes projected one incorrect image from Wigan 10 in the final round. The re-projection of the correct image got one more point than the one it replaced. This saw them move from 242 to 243. All above board or course but tantalising nonetheless.

Locked together the two teams headed in to a nail-biting tie break of five new photographs from five different photographers. The tension built – both clubs scored 13 (from 15) with their first image, then 12 each, then 12 each once more. It was the fourth image that saw Wigan sneak ahead 13 to 12. Ten each in the next round sealed the Wigan 10 win by a single point. Well done to them.

When presenting the Silver medal to Ian Munro of Inn Focus, Roy Thomas, former President of the WPF and now President of the PAGB, expressed his pride at their achievement. They also received quite an ovation for coming so close. Indeed it is probably fair to say that, in the great British underdog tradition, everyone other than Wigan 10 was rooting for Inn Focus. However, the team from up t’North proved to be a tough nut to crack yet again. They are multiple winners of this trophy which makes the Inn Focus effort all the more worthy.

The other WPF club, Gwynfa, had a midfield day but thoroughly enjoyed seeing they fellow WPF friends do so well and the Welsh contingent created quite an atmosphere.

Here are the full results and the awards. 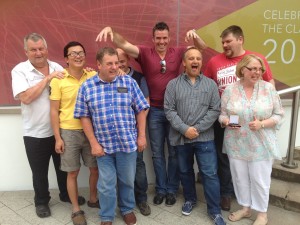