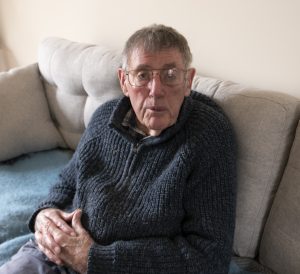 I visited Bill Grundy today and we had  a nice chat. He has donated 6 photography books for the club which we will use as a library for members to borrow. We reminisced the years from when I first joined Hay about 17 years ago and talked about the changing styles of competition winners. In his time he has accrued 2 Gold medals, a Blue Ribbon, Highly Recommended and over 70 acceptances through FIAP and others, competing worldwide including Australia, Czech Republic, Vietnam, Hong Kong to name a few. His last award was in 2002.

Bill was one of four founder members of the club back in the 1940’s – June, his wife, Brian Bentley and David Brinn. He remembered that at one time, club membership was so low, when they had a visiting judge for a competition only four members attended, so they all went round to the local pub for a drink!  He was also a member of Merthyr Tydfil for a number of years but travelling took its toll.

Bill became an honorary member of Hay for several years but ill health precluded him from attending meetings. He suffers from a muscle degenerative disease and his eyesight is not  so good. He will be 90 on Sunday 20 March. The same age as Brian Bentley, who sadly died earlier this year. However, we hope Bill will be around for a few more years yet.

Over the years, Hay has lost a number of lovely members, including David Brinn who emigrated to New Zealand in the early 2000’s and joined Marlborough Camera club. His legacy was to launch a new Battle with and Hay which we continue to this day.